BMW is one of the top brands of a car company. Owning a BMW would be any individuals dream. There are new series of cars that are introduced by this company into the market and attracting the people with their styling and appearance of a car model. The new car that is going to be released by the firm is BMW M4 GTS 2016. BMW already releases some images for its new BMW M4 GTS 2016. The pictures are taken in the international conference held in Spain. The release date for BMW M4 is in the second quarter of the year 2016 in the US markets. After being tested for many times it has been found to be a MotoGP safety car and the concept that are related to this are shown in the month of August. The performance of the new BMW M4 GTS is expected to be shocking and would make anybody think that the fastest car ever on roads from BMW.

The power for the GTS is because of the 3-litre twin turbo straight six which is the standard feature of M4. Here the GTS is fixed with the water injection system which has been tested before fixing on the Moto GP safety car is the main difference from other vehicles. This water injection system lowers the overall compression of temperature in the chamber of combustion. This mechanism boosts the pressure of GTS by reducing the chances of the engine being under knock. It has been designed with high power efficiency and torque capability which requires the addition of water tank of 5 litres. By this, the power is increased to 425bhp to 493bhp while the swelling of the torque would be from 406lb ft to 442lb ft. These are some of high enhanced BMW M4 Specs.  The top speed of BMW M4 is electronically limited to the performance of any other BMW. But the limit of speed is set to 190kmph one of the BMW M4 Specification. It is more than the expected range of 9mph. The engine outlet is connected to an exhaust of titanium. 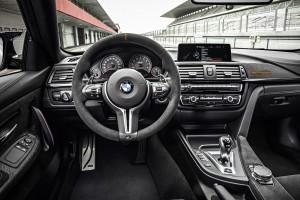 Here the BMW M4 Specifications are mentioned which ought to be advanced than the previous BMW’s models:

This BMW M4 Coupe is a high-performance automobile which is fascinating like any other models of BMW. The features and specifications are extremely unique and it is a petrol fuel type car with a power of 437PS. The numbers of cylinders that are fixed with the engine are 6 and the engine displacement is 2979cc. It is designed with a seven geared system and the transmission is automated.

Find your own BMW at CAR FROM JAPAN!