Appeared in numerous famous video games like Gran Turismo, Midnight Club, Tokyo Xtreme Racer, Forza Motorsport, Sega GT and also in The Fast and the Furious film series, the Toyota Supra is a grand tourer/ sports car manufactured by Toyota Motor Corporation between 1978 and 2002. The car was designed based on the Toyota Celica, but it was both wider, longer and more powerful. Toyota aimed to make the Supra as a strong competitor to other cars in the popular grand tourer market in North America and Japan - at that time ruled almost exclusively by Datsun’s Z-cars. The first Supra named Celica Supra (or Celica XX in Japanese market) was a car with 6-cylinder engine offering a more luxurious character. And so started the history of the legendary Toyota Supra.

Toyota Supra: A Legendary Sports Car Made In Japan

Let's take a look at the changes of Toyota Supra models over generations:

The Supra was officially launched in the American market on January 1th, 1979 as an offshoot of the Celica lineup. At that time, Toyota sold the car at a base price of $10,118. The car was powered by a 2.6L inline 6-cylinder engine with 110 HP and 136 Pf. The standard version was equipped with a 5-speed manual transmission, while a 4-speed automatic was optional. Compared to the standard Celica, the front of the Celica Supra was larger by approximately 5 inches in order to accommodate the 6-cylinder engine.

Originally, the first Supra was designed as a premium car in the Celica lineup with a stronger engine and more standard features like sunroof, tilt steering wheel, air conditioning, optional leather interior and AM/FM stereo. The Celica Supra was also the first vehicle of Toyota offering cruise control in the US. Power locks, power windows, automatic climate control were added to the options list throughout the lifecycle of the first model.

In the year 1981, the final year of the first generation, the car received a bigger 2.8L engine with 116 HP and 145 Pf of torque. Besides, Toyota debuted an option of sports premium package with front and rear spoiler and a firmer suspension.

In 1982, Toyota introduced the new Celica Supra which had a 2.8L inline 6-cylinder engine creating 145 HP and 155 Pf of torque and it was sold at the base price of $14,098. Throughout the second generation, engine output gradually climbed to top out at 161 HP and 169 Pf of torque in the year 1986. The transmission options still remained with a standard 5-speed manual transmission and optional 4-speed automatic transmission.

The second generation had 2 versions which were a performance version and a luxury L-Type version. L-type models was equipped with interiors which could be trimmed with either leather or plush velour and a digital instrument cluster. All Celica Supras in this generation got standard features including power mirrors, power locks, power windows, cruise control and automatic climate control. Two-tone exterior scheme, sunroof and an audio system with 5 speakers and cassette deck were optional. The third generation of the Supra was introduced as a 1986.5 model and separated from the Celica. While the Celica turned into a sports compact car with a front-wheel-drive setup, the Supra kept using a rear-wheel-drive setup with 6-cylinder engine and started at $18,610. The 1986.5 model was powered by a 3.0L inline 6-cylinder engine producing 200 HP and 196 Pf of torque, but the 1987 model year got an implement of a turbo model pushing output to 230 HP and 240 Pf of torque.

On regular Supras, a sports package was offered as an option. But on turbo cars, the sports package was standard to add headlamp washers and a limited-slip differential, adjustable suspension system. Besides, automatic climate controls, power mirrors, one-touch power windows, 8-way adjustable sport seats were the standard features of every Supra in the third generation. Leather interior, a targa roof and antilock brakes were offered as options. 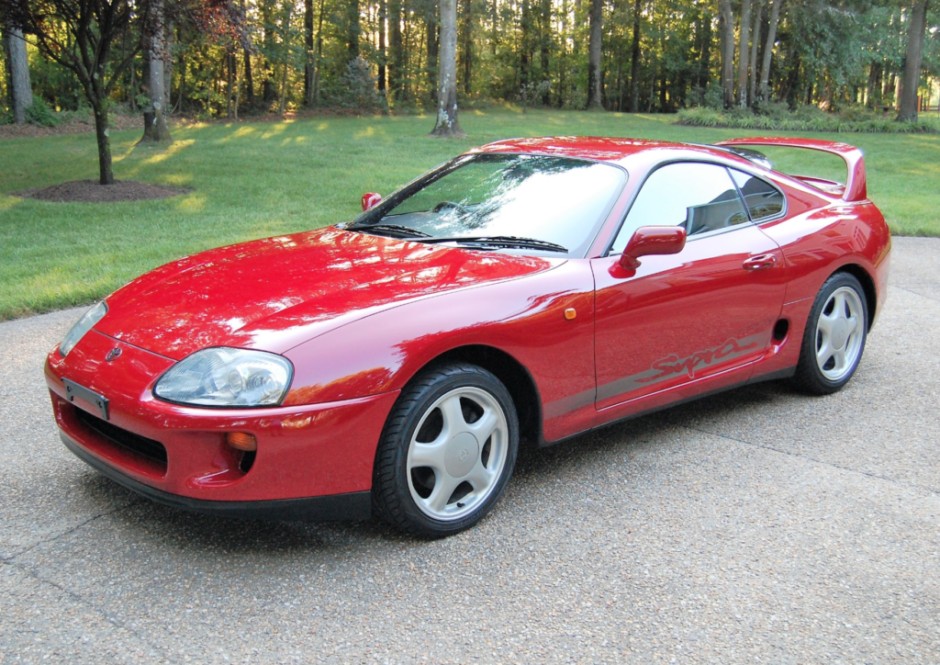 The fourth generation of the Supra (known as MKIV to car fans) was introduced in June 1993 and this generation was renowned for using a well-performance machine and began at $34,225. Engineers started by trimming weight where possible utilizing aluminum for the transmission pan, oil pan, front cross member, targa top, hood and various suspension bits. Moreover, Toyota used a plastic gas tank and magnesium steering wheel for cars of this generation. Therefore, the weight of the fourth-gen decreased by 200 pounds, compared to its predecessors.

As the sales of all sports coupe were decreasing in North America by the late 1990s, so Toyota decided to withdraw the Supra from Canadian market in the year 1996 and the American market in the year 1998. In 1998, the Turbo wasn’t available in California Air Resources states (CARB). Production in Japan continued until August 2002 and Toyota stopped manufacturing the Supra due to limitative emission standards.