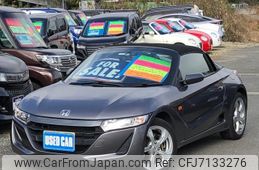 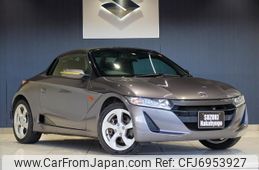 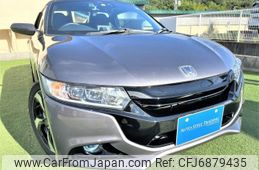 The Honda S660 is a tiny two-seat sports car manufactured by Honda to fit the Kei car category. Designed by Mr. Ryo Mukumoto who competed with 400 others to win an in-house Honda’s competition and was also the youngest engineer in the Honda’s development team at that time, the Honda S660 is a great combination of some designs from the past to present. It owns the same platform which is used for the Honda N-One. The design looks identical to the 1990s Honda Beat. The size and engine of the car are quite small like many other prior Kei cars.

The concept design was introduced to the public at 2013 Tokyo Motor Show. In the later months of 2015, the car was originally launched in the Japanses Domestic market. Right after the debut in Japan, the car quickly gained a lot of admiration at its little design from many car lovers all around the world. Quite interesting, right? So if you are seeking for a Honda S660 for sale or just simply want to know more about this funny car, take a closer look at a full Honda S600 review from auto experts and consumers below:

Before buying either a new or used Honda S660 for sale, learning about the car design, engine, performance and other parts is very essential for you to make a better decision.

The front part of the S660 has the same look like the Honda NSX whereas the rear part is similar to the CR-Z. Plenty of nice cosmetics are fitted for the S660. For example, soft top, alloy wheels and LED lights are some basic content. The car is 133,7-inch long and 58,1-inch wide that is perfectly meet the Kei car regulations.

As the size of the S660 is too small, it looks like a baby car if you take it around a standard sedan or hatchback. And if you park it somewhere among the SUVs, it might disappear.

Many people may think that the Honda S660 has a small inside. But actually, it is not true. The two seats are very convenient and even the outside view is pretty normal. Once you sit in this car, you would never feel that it is tiny. Moreover, other high-quality components are fitted for the car, such as leather seats, leatherette gear knobs and 13.8-inch leather-wrapped steering wheel.

Everything is designed and located nicely for the driver and passenger. Other baby cars cannot carry anything more than 2 adults and a cup of coffee.

Its rear-wheel-drive is funny to drive in some ways. It operates like a sparrow when you run the car. Whereas the hard suspension creates a sporty feeling when the car is at high speeds. Particularly, the speedy corners and sharp turns are very much under control.

A very useful infotainment system is offered for the Honda S660. This system gives plenty of cool performance choices. You can find a G-meter displaying the accelerative index of the car. Other cool options include radio play, smartphone connectivity, and the navigation.

The Honda S660 comes with a very useful infotainment system. More than just being a multimedia player, this system offers pretty cool performance options. Well, it has the g-meter which displays the accelerative index of the car. And nothing of it is apparent. Instead, it is all real. Moreover, the colored driver’s cluster display has a pretty nice design.

The seatbelts and the airbags are definitely fitted for the car. But in order to enhance the safety, the S660 has sports safety feature as well. The car gets the handling to assist with the stability control and traction which grips the car on sharp turns and corner when its speed is over 56 mph.

Note: When purchasing a Honda S660 for sale, you should always choose to buy from a reliable dealer as he can sell you a car with much life left. If you make a deal with an unknown dealer, there is nothing to guarantee the quality of the car and you may have to pay more afterward to repair and maintain it.

In case you don’t know where to buy, you can surf some trusted platforms selling used cars such as CarfromJapan.com to get advice from the professional sales agent and let them help you in finding a car fitted your demand and your budget the best.