GO ‘BEAST’ THIS APRIL WITH THE BMW X6!

The BMW X6 is every SUV lover’s budget dream car. Its elegance will fascinate you, its agility will inspire you and its presence will impress you.
The X6 has heaps of equipment and a luxurious interior. The latest version is also roomier and more practical than the model it replaced too, if still behind most other big SUVs in this area.

The defining characteristic of the BMW X6 (and to a lesser extent the X5) has always been the car-like way it drives. Despite tipping the scales at a portly 2,065kg, the X6 manages to weave its way through corners with masses of grip and precious little body roll – especially in the incredible (and bonkers) X6 M performance version. It certainly rivals the Porsche Cayenne for driving entertainment.
Performance

The steering could do with a little more feedback but it’s still very responsive. Four driving modes are available – Eco Pro, Comfort, Sport and Sport+ – that alter the mechanics of how the car feels to drive, although Eco Pro is mainly focused on setting the car up to be as frugal as possible.
Design

The X6’s sleek lines mean it’s the most distinctive SUV in BMW’s range
Image is a big part of the upmarket SUV sector and cars such as the BMW X6 cater perfectly for buyers looking for a dash of extra style. It’s less practical than the larger X5 on which it’s based but that’s not to say it’s difficult to live with. To accentuate the X6’s width, BMW has flattened and widened its trademark kidney grille and added a pair of narrower headlights that curve round to the front wings. The headlamps also feature distinctive LED running lights.

BMW has added a clever design detail behind the X6’s front wheelarches called an ‘air curtain’, which consists of vents that let air out of the front wheel wells to reduce drag and improve efficiency. The X6 doesn’t look as sporty at the rear than it does at the front and appears a little awkward due to its height. 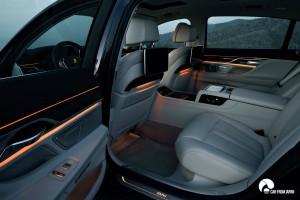 The X6 has the latest version of BMW’s iDrive infotainment system with a 10.25-inch screen and satellite navigation as standard. The system is very easy to use – far more so than previous versions – and it’s all controlled via a dial on the centre console. Given its price and status, the likes of Bluetooth, USB sockets and cruise control all come as standard.

The BMW 6 is a ‘beast’ in its own category, has the right specs for a reliable, comfortable and safe car. You can purchase various models of the BMW from : www.carfromjapan.com