Lamborghini has always been in the luxury end car manufacturer category. Six years ago, they put a stripe on a special-edition Gallardo and named it in honor of Valentino Balboni, the company’s longtime test driver. While toiling away over the sticker package, Lambo’s engineers also yanked the front differential and slightly detuned the car, creating the rear-wheel-drive Gallardo LP550-2. Here, finally, was a machine that put itself right up against Ferrari’s mid-engined, rear-wheel-drive V-8–powered cars, something Sant’Agata hadn’t done in decades. Lamborghini is now debuting the Huracan LP580-2

The rear-drive Huracán follows the same recipe that directed the Balboni: The front diff and its attendant hardware is removed, as is 73 pounds of curb weight, and total output is reduced slightly, from 602 horsepower to 572. Peak torque falls to 398 lb-ft from 413. To compensate for the reduced weight on the front end, the nose has been redesigned with additional downforce, while the spring rates also have been fiddled and futzed with to best exploit the car’s newfound 40/60 weight distribution. 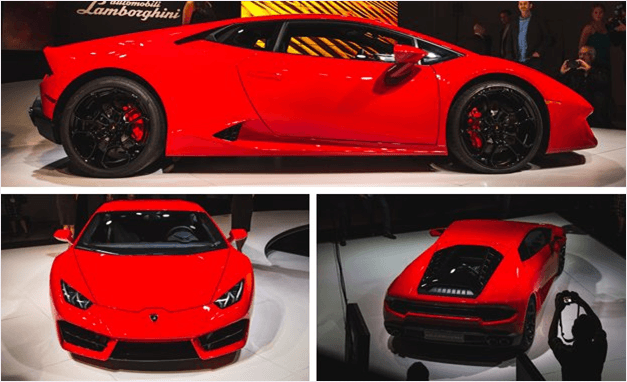 Aside from the restyled front end, which we’re not sure is necessarily an aesthetic improvement over the 610-4’s pugnacious, wedgetastic mug, the only other visual clues that this Huracán is special are the 19-inch wheels, wearing Pirelli P Zero tires specifically developed for the rear-drive model. The only wheels available on the four-wheel-drive 610-4 are twenty-inchers.

One thing that was available on the Balboni that unfortunately won’t be part of the 580-2’s package is a manual transmission. We’re stuck with the regular Huracán’s seven-speed dual-clutch automatic, but perhaps to salve the raw hearts of sporty-car purists, Lambo has recalibrated the driving modes for a bit of extra rear-drive hoonery. The Sport mode, in particular, allows for “sporty and emotional driving fun with slight oversteering behavior.” We like sportiness, emotions, and slight oversteer now and again.

Even though Saving the Manuals will have to wait for another day—or perhaps a different Lamborghini—it’s fantastic to see a road-legal rear-drive Huracán in the lineup. Sure, the Huracán-based 620-2 Super Trofeo exists, too, but it’s a track-only machine meant for Lambo’s Blancpain Super Trofeo one-make series. Given how the four-wheel-drive Huracán offers as visceral an experience as the (rear-drive) McLaren 650S and Ferrari’s 488GTB, eliminating the driven front wheels should make the experience all the more so.